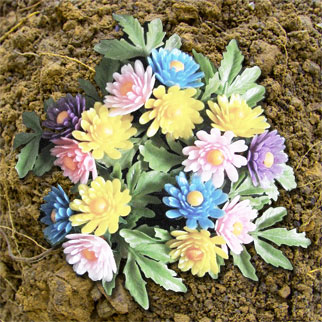 "[The righteous are] like a tree planted by streams of water that yields its fruit in its season, and its leaf does not wither. In all that he does, he prospers. The wicked are not so, but are like chaff that the wind drives away" (Psalm 1: 3-4, ESV).

I once lived in an apartment complex where a neighbor placed artificial flowers in the ground around her patio. It could be quite disorienting to see bright blooming flowers “growing” up through the snow in winter. Every time I saw them (and I saw them every day) I thought of how my dad would react if he were alive.

My dad was a florist; a noted grower of real roses and other flowers. He was very picky about the quality of the flowers he would allow to be cut and passed along for sale. And he hated fake flowers. He could spot them a mile away. That is, until the technology changed and the fakes began looking more and more like the real thing. He hated that. Being faked out.

My mother preferred real flowers but was okay with the plastic ones. She felt they had their place. Dad usually bit his tongue on the topic around mom. He let her do her thing. But I don’t think even she would not have “planted” fake flowers in the ground in real soil. That would have been just too weird.

I agree. Some things just are not meant to be.

Yet, there are people who are like fake plants in real soil all around us. They go to church, know the lingo and the liturgy, and have that dazzling – Is that plastic, you wonder? -- smile. At first, they seem okay, but then it snows and something seems awry.

Grounded Christians are like super perennial plants. They may not bloom in the snow, but they’re alive and solidly rooted no matter what. Real people of real faith may wilt when the soil is dry or the weather is harsh. They’ll bend in the wind. They’ll lose their petals when whacked. They’ll turn brown if a dog pees on them. But they’ll also recover, straighten, re-green, and arch toward the Son when the storms pass. In the Son-shine, they blossom. and reveal their full splendor.

Fake plants blow away in a storm because they have no roots. When faced with constant sunlight, they fade. In the glare of the sun they are exposed for what they are – fake.

As the prophet Jeremiah explained, “Blessed is the man who trusts in the Lord, whose trust is the Lord. He is like a tree planted by water, that sends out its roots by the stream, and does not fear when heat comes, for its leaves remain green, and is not anxious in the year of drought, for it does not cease to bear fruit” (Jeremiah 17:7-8, ESV).

Got roots? Or are you just faking it?