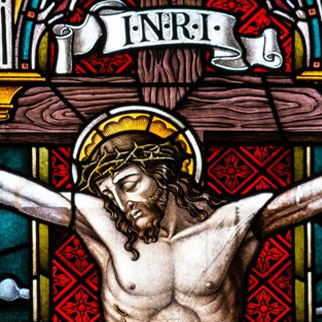 "And they spit on him and took the reed and struck him on the head. And when they had mocked him, they stripped him of the robe and put his own clothes on him and led him away to crucify him" (Matthew 27:30-31, ESV).

I’m not sure I really know what true suffering is. Especially in light of what Christ endured. But we all do believe we suffer in one way or another.

For some, it’s a nagging, persistent pain in the body or in the heart that just won’t go away. Could be a touch of arthritis or the slap of ongoing rejection. Both hurt and make us a bit gimpy in different ways. Aging brings its myriad afflictions. The aches are new every morning!

Is it suffering to endure these injustices of time and circumstance? These cruel reminders of the Fall?

I have tinnitus. Both ears house a non-stop high-pitched whine. It started in the early 90s on the heels of a particularly bad sinus infection. The doctor said I had high frequency hearing loss that causes the ringing. There’s no cure, so I endure it day in and day out. Is this suffering?

A little more than five years ago, BethAnn and I moved in with her dad. He’s 90 and was widowed the year before we moved in. I watch him, bent, hobble around the house as age does its inexorable work in his body. But, if he’s suffering, he doesn’t say. At least not in so many words.

Not of my choosing, I have been estranged from my son for years. I long to be reconciled, to know grandchildren and a daughter-in-law I’ve never met. But is this heartache suffering?

An older, King James sense of the word “suffer” means to “permit.” So, we “suffer” the little children to approach. It’s an interesting twist. Do I permit the ringing in my ears? Do I permit the ache in my heart over estrangement from my son?

Paul claims that suffering builds character (Romans 5). In other words, eventually, it’s all good. As we endure suffering we are made better, more Christ-like. In that case, permitting those things that bring suffering may be the right attitude.

Discernment and wisdom is called for in this process. And probably patience.

The news is full of sufferable situations. Losing loved ones to COVID-19. Having a child kidnapped and murdered. Foreign countries being overtaken by violent enemies. People beaten and robbed on the street. Surviving near-death amidst an extreme natural disaster. Losing fellow parishioners to a white supremacist’s unprovoked shooting spree. On and on it all goes.

And yet, in these and similar situations, as those affected tell their own stories, so often, while they are clearly grief-stricken, they don’t embrace the descriptor of “one who is suffering.” Rather, they view themselves as overcomers. They’ve gone through a kind of hell and emerged, or are emerging, somehow, better.

So it all comes back to, compared against what Christ endured, what is suffering?

In this precious, mostly cushy life we live, maybe most really haven’t suffered much at all, even in times we’ve thought were hard. But, perhaps, we have overcome much as we lose ourselves in him and the grace gained because of his suffering.

After all, grace always wins.

"And the God of all grace, who called you to his eternal glory in Christ, after you have suffered a little while, will himself restore you and make you strong, firm and steadfast" (1 Peter 5:10, NIV).