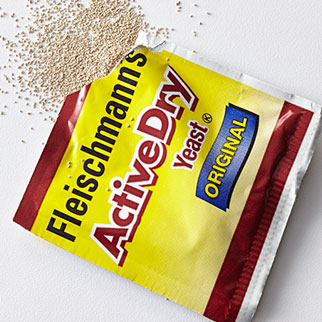 "And he cautioned them, saying, ‘Watch out; beware of the leaven of the Pharisees and the leaven of Herod.’ And they began discussing with one another the fact that they had no bread. And Jesus, aware of this, said to them, ‘Why are you discussing the fact that you have no bread? Do you not yet perceive or understand? Are your hearts hardened? Having eyes do you not see, and having ears do you not hear? And do you not remember?’" (Mark 8:15-18, ESV).

Yeast is a catalyst for fermentation. A tiny amount can have a large effect; just ask anyone who has baked bread! A catalyst is something "that precipitates a process or event" or an idea or philosophy.

A yeasty idea you may be familiar with is the adage that "God helps those who help themselves." It sounds good and seems innocuous, right? Some even believe that it is a verse from the Bible. But it isn't. In fact, it's actually not scriptural and even has a corrupting effect on how we view our relationship with God. The simple truth is that God helps those who are helpless (Romans 5:6-11).

So what was the yeasty idea that Jesus was warning about? A hint is provided later on in the same chapter of Mark. Peter tells Jesus that he shouldn't talk about his death. Jesus rebukes Peter sternly: “Get away from me, Satan! You are seeing things merely from a human point of view, not from God’s (NLT)."

Earlier in Mark 7:7, Christ, commenting on the state of the culture, references Isaiah 29:13 saying, "These people honor me with their lips, but their hearts are far away. Their worship is a farce, for they replace God’s commands with their own man-made teachings." Christ also specifically tagged the yeast of the Pharisees and Sadducees as "hypocrisy" and their teachings in general.

Essentially, it would be safe to state that any yeasty idea, concept, philosophy, etc. that is not scripturally supportable and does not take a godly perspective (replacing God's truth with man's "truth") would be something Christians should guard against.

Which means just turning on the TV, listening to popular music, reading a modern novel -- pretty much living in this world -- requires serious caution on the part of Christians.

But yeast can be used for positive purposes. Christ uses the same imagery in Matthew 13:33 where he says, “The kingdom of heaven is like leaven that a woman took and hid in three measures of flour, till it was all leavened.”

Along with yeast, Christ compared the Good News of the Kingdom of God to a mustard seed “that a man took and sowed in his field. It is the smallest of all seeds, but when it has grown it is larger than all the garden plants and becomes a tree, so that the birds of the air come and make nests in its branches” (Matthew 13:31-32).

As we actively bring the clear and solid truths of God's Word into our lives and into our culture, this more powerful yeast can counteract the negative influences of our culture. Each time we speak His Word, we are planting another mustard seed of truth that can grow into a mighty hedge against the godlessness of the age.

This is the Good News for us and for others. Be on guard, but also work some godly yeast into your neighborhood and plant some mustard seeds of holy hope in your community.