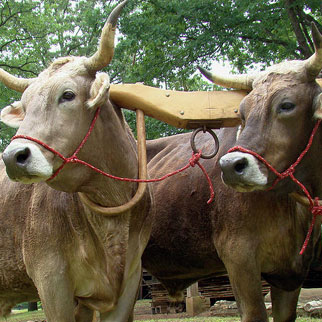 Seems like a sweet, soothing sentiment. But what’s a yoke and what is it used for?

The Holman Bible Dictionary explains that a yoke is a wooden frame placed on the backs of draft animals to make them pull in tandem. The simple yoke consists of a bar with two loops either of rope or wood that goes around the animals’ necks. More elaborate yokes have shafts connected to the middle with which the animals pull plows or other implements. The word is used most often in the Bible to speak of slavery, bondage, and hardship (1 Kings 12:4, Jer. 27:8). Positive usages include the yoke of Christ (Matt. 11:29-30) and the joint nature of the church’s work (Phil. 4:3).

In other words, a yoke is a mechanism of control.

The word “control” is usually viewed as a negative. We all know someone we believe to be “controlling.” The connotations evoked are usually along the lines of manipulative, dominating, bossy, and so on. Kids often throw the barb at parents when they bump up against household rules. What mom or dad of teens has not heard, "You're so controlling! You're just want to manipulate my life and spoil my fun!"

Excessive control can be a bad thing when it crosses into abuse. However, control in itself is not bad. In fact, it is essential to a Christian's life.

We hear a lot about freedom in Christ, but not a lot about control in Christ in a positive sense. When we hear Matthew 6:33, often the sweet images evoked are actually in contrast to what Christ is really saying. We forget what a yoke is and what it is used for: A yoke is an implement of control, restraint, and guidance. Think about it. It may be “light” and “easy” but it is still a yoke.

When children accuse their parents of being controlling, the correct response is, "You bet I'm controlling. It's my job!" Parents are supposed to be in control of their children, which means accepting the responsibility to provide guidance, direction, discipline, and firm boundaries. Children raised with no control often end up being out-of-control adults.

In life, in general, we need to control our cars on the road, our tongues in every situation, and discipline ourselves to be productive at work and loving at home. Healthy control yields true freedom. Lack of control leads to chaos and the bondage of negative, even eternal, consequences.

We live in a time and culture that fervently seeks to cast off all sense of restraint and self-control. It's tough when society blesses what is an offense to God putting us counter to the culture.

As Christians, we are supposed to control ourselves, our passions, our choices, our behaviors, and on and on. We do this by submitting our lives to the control of the Holy Spirit, to the will of God, to the authority of Christ. All to a good and righteous end.

Bob Dylan sang, "You gotta serve somebody." 1 Peter 5:8-9a sums it up: "Control yourselves and be careful! The devil, your enemy, goes around like a roaring lion looking for someone to eat. Refuse to give in to him, by standing strong in your faith" (New Century Version).

Personally, I'd rather serve than be eaten.

good writing. i enjoyed the article.