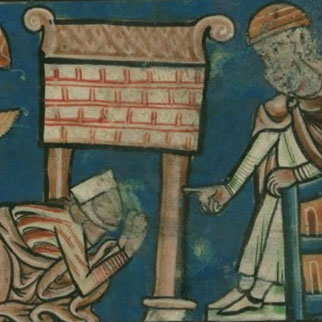 “Now Eli the priest was sitting on the seat beside the doorpost of the temple of the Lord. [Hannah] was deeply distressed and prayed to the Lord and wept bitterly. And she vowed a vow and said, ‘O Lord of hosts, if you will indeed look on the affliction of your servant and remember me and not forget your servant, but will give to your servant a son, then I will give him to the Lord all the days of his life, and no razor shall touch his head.’

As she continued praying before the Lord, Eli observed her mouth. Hannah was speaking in her heart; only her lips moved, and her voice was not heard. Therefore Eli took her to be a drunken woman. And Eli said to her, ‘How long will you go on being drunk? Put your wine away from you.’ But Hannah answered, ‘No, my lord, I am a woman troubled in spirit. I have drunk neither wine nor strong drink, but I have been pouring out my soul before the Lord. Do not regard your servant as a worthless woman, for all along I have been speaking out of my great anxiety and vexation’” (ESV).

Have you ever made a wrong assumption about another believer like Eli did about Hannah? Haven't we all? Too often these wrong assumptions lead to hurtful behavior perpetrated on the one being assumed about, not to mention fueling damaging gossip that can never be recalled or erased.

There was stunning commercial on TV from G.E. in 2013 touting their water purification systems (https://youtu.be/aRhXqEj92SA).

Depicted is a quartet of musicians playing "Water Music" by Handel. What's striking is that the four players are all made of water. As the commercial opens, the music is perfectly in tune, yet discord comes in with several sour notes.

One water person has "impurities" that have appeared that impairs his playing. Does the concert come to a halt? Do the other players point accusing fingers at the "impure" player? Does the concert hall erupt in angry protest? Is the "unclean" player cast aside? Nope. None of these things happen.

Very simply, the lead player picks up a strainer and scoops out the impurities in the "out of tune" player, and the musicians carry on in perfect harmony.

Think of the strainer as the Bible and the act of scooping as grace.

What a striking contrast to what too often occurs with Christians. We tend to be more like Eli or those who were bent on stoning the woman accused of adultery (John 8:1-11).

We see something we don't understand or don't like, and without checking our facts, rush to judgment in a fit of self-righteous indignation. In the end, everyone gets hurt and God is not glorified.

There was also a series of anti-drug and anti-drinking commercials years ago where one teen is in a serious life-threatening situation (about to drown or be run over by a truck) and another teen, a "friend," is standing by watching doing nothing. How chilling, but how telling. This is us when we see a brother or sister who is wavering a bit in their faith or taking a detour from the path of righteousness and we fail to offer help, thinking, “It’s really none of our business.”

We should not assume, accuse, or walk away. But rather, like the Good Samaritan, pick up and care for the wounded, offer to scoop out the impurities, and seek to rescue the fallen from danger. If they refuse help or correction, that's not our issue -- it's between them and God. But once restored, with impurities removed, we move on side by side, rejoicing.

The next time, it may be us that needs a scooping hand.