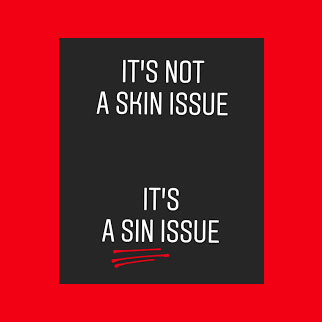 A popular meme making the rounds declares, “It’s a sin issue, not a skin issue.”

What is “it”? Racism and related racial issues.

The meme is partially correct, it is a sin issue. However, this isn't really helpful because a lot of things are a “sin issue.” And the way we deal with sin issues in our lives is by getting specific and naming them.

Paul has no problem getting specific about sin. In 2 Corinthians 12 and Galatians 5, he offers a couple of starter lists: quarreling, jealousy, anger, hostility, slander, gossip, conceit, disorder, sexual immorality, impurity, sensuality, idolatry, sorcery, enmity, strife, fits of anger, rivalries, dissensions, divisions. I say starter list because throughout the Bible, numerous specific sins are cited and we are cautioned to avoid them.

But what about racism? Someone will be quick to point out that there is no scripture in the whole Bible that says explicitly, “Thou shall not be a racist.”

True. But racism is a big topic and we need to break it down and examine its parts, which are Legion.

Racism determines a person’s value often based on their skin color. Light skin is considered better than dark skin. As a result, those who are darker are treated as less valuable, less important, less deserving of love, mercy, or justice.

The Oxford English Dictionary defines racism as, “Prejudice, discrimination, or antagonism directed against a person or people on the basis of their membership in a particular racial or ethnic group, typically one that is a minority or marginalized.”

Milton Massie, an executive director at CRU, in writing about the recent unrest that erupted after the killing of George Floyd, personalizes racism stating, “George Floyd’s heartbreaking cries for breath have resonated so deeply because his killer literally took that God-given breath, and his humanity, away from him. God calls this sin murder. And it’s important to name it.... At its core, systemic racism denies God’s image and his breath.”

As Christians, we are called to exercise justice, mercy, and love. This love, justice, and mercy is supposed to be directed toward all who are created in the image of God, regardless of their skin tone or ethnicity or any other differentiating factor.

So, racism is a sin issue and can be a skin issue that is rife with injustice, lacks mercy, and is void of love. By breaking out the components of racism, we can confess and repent of these sins, and seek to repair the damage caused.

There’s an old church song from 1897 that says, “Count your blessings, name them one by one.” Why? “To see what God has done!”

This is, of course, a good thing, and a joy to do. But another good thing that takes courage is to invite the Holy Spirit to expose our sins, name them one by one, bring them to the foot of the cross, and repent. As we know, “If we confess our sins, he is faithful and just to forgive us our sins and to cleanse us from all unrighteousness” (1 John 1:9).

But what does it mean to repent? Biblically the word can mean turn, return, seek, and restore.

True repentance must lead to a true change in thought, deed, and intention. It’s a complete U-turn. A sin repented of is a sin abhorred. And when it is a sin that has impacted others, repair can be called for.

Memes are interesting, but a better source for truth and life change is the full and complete Gospel where racism has no place.